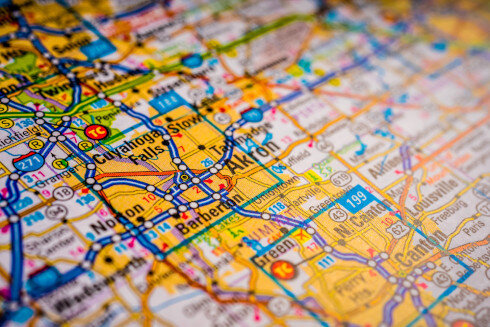 We want to do something a little different today here at Prestige Door. Normally, we provide you with top-notch information, tips, tricks, and thought leadership on everything garage door-related. We’ll even sometimes get into how to have an amazing external home layout or the best advice for keeping your property safe and secure. What we have not done yet is dig into the rich history of our area. We service garages, garage doors, and garage door openers in the Northeast, Ohio area, but we’ve never talked about it. Perhaps you are new to the area. How much do you know about your new neighborhood? Or maybe you live here but don’t know the rich history of our area. Well, worry not, we are going to take you with us on a trip through time.

We are a local company. When it comes to servicing all your garage door needs, you can expect a local touch from us. We are not a huge conglomerate or national company with an impersonal touch. Based out of Uniontown, Ohio, we live in your neighborhood and are proud to be your neighbors. So, we thought it would be a good idea to write a blog about our area, and share interesting tidbits about it. We know a lot about garage doors and garage door repair, but what about our local history? We actually learned quite a lot ourselves. How much do you really know about Northeast Ohio? Let’s find out!

How about we start with geography. Ohio’s northeastern region sprouts from the shores of Lake Erie. Cleveland is the county capital, but Akron and Youngstown are also highly urbanized and growing. Northeast Ohio encompass an area from Painesville in the top corner down to as far west as Mansfield and as far south as Cadiz. From the Rock and Roll Hall of Fame to the stunning Cuyahoga Valley National Park – Northeast Ohio is a gem.

The history of northeast Ohio actually starts with the Native Americans. The prehistoric Native Americans, the Erie and Fort Ancient people, were conquered or driven away by the Iroquois halfway through the 17th century. The Shawnee people was another large tribe in the area around the same time. While the Shawnee tribes people were wanderers by nature, they had strong presence around modern-day Akron. There was a rich tribal history from modern-day Cleveland south to Canton, with tribes from the Wyandot to the Scioto, Miami, Mingo, Ottawa and Chippewa people occupying a large area.

This land was a perfect area for trade and travel. Efficient travel was on streams, rivers, and lakes by canoe, then, when they could go no further, travelers would portage across the land between waters. The most important trails ran north and south. These were the trails that connected Lake Erie with the Ohio River. Settlements grew up along the river and around these areas because of the abundant natural resources near these trails, as well as the ease of transportation on local waterways.

These important trails were used successively by the Native Americans, then by explorers, the military, and finally by settlers. Today the original Lake Trail lies under U.S. Route 20; the Great Trail blazed the way from Pittsburgh to Freemont to Detroit; and the Warrior Trail made its way from Portsmouth through Upper Sandusky, and now is the bed of U.S. Route 23.

The Industrial Revolution in Northeast Ohio

Today, northeast Ohio is diverse and historically rich. It is this mix of natural beauty, large urban centers, and major manufacturing areas that make the northeast quadrant of Ohio so unique. Akron became the early urban center with the making of the Erie Canal. The highest point in Summit County was where boats were lowered onto the Ohio River. Of course, people naturally began to build in the area.

By the time the Industrial Revolution was taking hold in Ohio, the northeast was fast becoming a manufacturing power house. A lot of the raw materials that make up garage doors and their components was produced in northeast Ohio. From steel mills to factories, shipping centers, and more – the golden age of industrialization changed lives in northeast Ohio.

Summit County and Akron in particular were excellent transition points for goods moving in both directions. Not long after the area expanded, grist and flour mills appeared on the river banks. This was also where over half of all Ohio farmers could ship their fruits and product to the East Coast or as far down south as the Gulf of Mexico. Large mills ground wheat into flour and corn and other food commodities were offloaded in Akron.

Modern-day northeast Ohio is a diverse part of the country with many notable landmarks and things to see and do. And it is still considered a regional manufacturing hub because of its strategic positioning between the river banks and shores of Lake Erie.

Cleveland is a beautiful region bordering Lake Erie to the north. This area is home to notable landmarks such as the Cleveland Clinic, the Rock and Roll Hall of Fame, and the Pro Football Hall of Fame. Akron and Youngstown are also beautiful cities with rich histories. Despite its smaller population, Akron produced numerous famous residents during the twentieth century. Astronaut Judith Resnik, who died in the Challenger explosion, and Pulitzer Prize winner and former U.S. Poet Laureate Rita Dove both graduated from high schools in Akron. Many musicians actors, and models also call the Akron area home.

When it comes to natural beauty, the area encompassing Cuyahoga Valley National Park simply can’t be beat and offers a diverse array of activities. Whether you prefer attending ranger-guided programs or exploring the park on your own, you can find something to your liking. Ohio’s only national park blends rolling hills with verdant valleys and covers over 33,000 acres. The backdrop, a landscape etched by glaciers and carved by the Cuyahoga River, provides a lesson in Midwest modesty. It’s striking but not excessive. Photogenic, but you won’t hear it bragging.

Here at Prestige Door of Northeast Ohio, we are so proud to call this area home. We’ve been proudly serving areas from Canton to Cuyahoga Falls and everywhere in between. We hope you have enjoyed this trip back in time as we learned more about our home. Next time you need a new garage door or garage door repair, give your neighbors in northeastern Ohio a call. At Prestige Door, we can’t wait to service your home!